Viranlly Liemena is man behind the eponymously named men’s style Tumblr and Instagram. He started the blog in college, three or four years ago, shooting pix with an iPhone. Now, he’s the assistant merchant here, which means he helps with design and styling. This summer, he’s taking on the (controversial) shorts-suit.

On different shades of gray

“I wear suits almost every day. So mixing and matching is more about keeping myself interested. When you feel like wearing something new, you don’t have to buy a whole suit; you can just get a new tie, or put together what you already have.”

Long and the short of shorts

“I don’t deal with heat that well, so I always want to find ways to stay cool. I grew up in a tropical country, so people expect I can handle heat. But in places that hot, you actually end up having air conditioning 24/7 and staying indoors most of the time.” 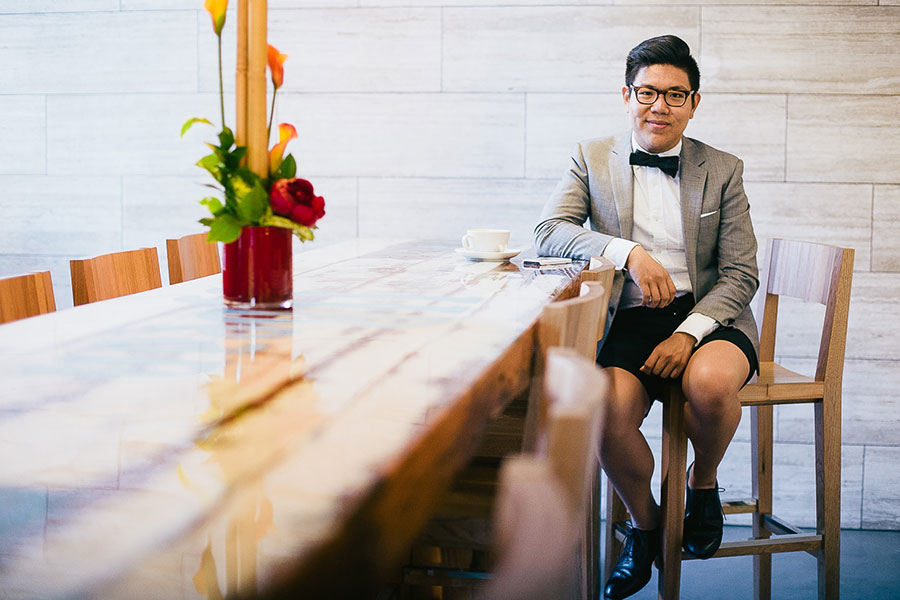 Why shorts make people freak out

“Shorts with a suit is a pretty new idea, and new ideas are never easy to digest. A lot of bloggers are posting about shorts right now, and some people love them, and some people hate them. Sure, for some people who are conservative, it might be that they don’t like it because it’s untraditional. But this is 2014; you can wear a suit however you want. So to me, it’s more about everyone just having a chance to get used to it.

“It’s like skinny jeans back before anyone was wearing them. When I first tried a pair on, I was like, ‘Why would anyone wear these?’ then three years later, me and my friends were all wearing them. Now, anyone who goes in for a new pair of jeans starts by saying they want them slim.”