It’s easy to lose track of time around Canadian photographer Chris Haylett. Three minutes into our interview, the usual pleasantries quickly turned into deeper conversations about 1970s film, the changing art landscape in the digital world and the genius of David Bowie—obviously. It was apparent from the get-go that not only is Chris a brilliant artist, but he’s a bit of a savant when it comes to all things music and movies.

For our FW17 lookbook, Modernist, we enlisted Chris’ help to bring our creative team’s mod-influence concept to life. His cinematic background paired with his long-time affinity for this subculture made for authentic and jaw-dropping images. Learn more about Chris and take a look at highlights from our FW17 shoot below.

You come from a film background—do you introduce cinematic elements into your work, and in particular, your editorial shoots?

Yes, I absolutely do. I love shooting editorial where you have the license to go off and do something creative. As much as I can, I structure my shoots as if I’m shooting a movie. Some of the shots are cropped tightly, some are looser, and you can do an establishing shot like they do in films. There’s a rhythm to it.

When I started out in the business, I accidentally found this photographer Fabrizio Gianni; he was shooting for GQ and doing all this incredible editorial. His images were what we would describe as cinematic. It was like nothing else. I just fell in love with his work and then I found out later that he had a film background as well. He was actually the assistant director on the Sergio Leone spaghetti westerns with Clint Eastwood.

“As much as I can, I structure my shoots as if I’m shooting a movie. Some of the shots are cropped tightly, some are looser, and you can do an establishing shot like they do in films. There’s a rhythm to it.”

What is your favorite era of film and why?

1970s, without a doubt. The industry went from overproduced, big Hollywood films that weren’t exactly breaking new ground to having these new directors like Scorsese and my all-time favorite Francis Ford Coppola coming in to change the game. Coppola did pretty much all my favorite movies like The Conversation, The Godfather parts one and two—part three sucked, and to me, the pinnacle of filmmaking was Apocalypse Now. 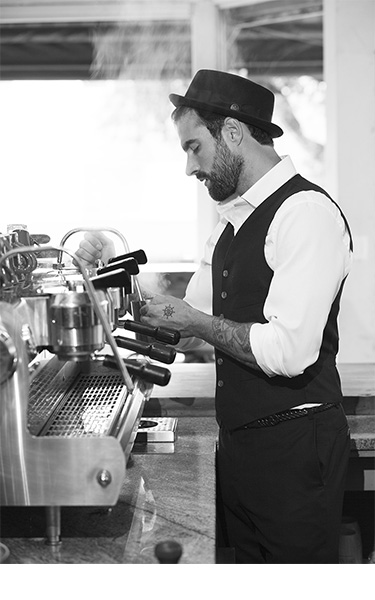 So how did you end up shifting your focus to photography?

I was never a photographer in film school, I was going make the next great Canadian film. Back then I didn’t even have a camera. I was sort of a budding entrepreneur and  started writing and directing small TV commercials. I’m talking quick and dirty car lot commercials—the ones that Saturday Night Live and Comedy Central make fun of. But I needed a camera to do that, so I bought one and shot rows and rows of used cars.

And then I started shooting rock concerts. I went around to some magazines like the Westender and did it mostly for free. I’d get into the pit and sometimes I’d get backstage. it was brilliant. It was the best. I could reach over and touch David Bowie’s shoes on stage or Sting or Duran Duran.

Then the Westender came to me one day and said, “We’ve got a fashion shoot. You shoot rock concerts, that’s sort of the same as fashion.” I didn’t see the connection, but I said, “Sure.” They had a budget of around $500, and coming from selling pictures for $25 each, that seemed like a lot of money. So I was on a cheesy shoot with girls in bikinis and I thought I’d died and gone to heaven.

“It’s really gratifying when everyone is on the same page. When that happens on a shoot, the feeling is so good—it’s like the best of any of your excesses.”

You worked with us on our FW17 Modernist campaign. What are your memories of the mod era and how did you tell that story through your photographs?

I’ve always identified with the mods and appreciated their ethic—they came out of Britain and were in opposition to the rockers. If you’ve seen Quadrophenia, you sort of know how that all plays out. A lot of mods were urban, disenfranchised, young men and the rockers tended to be rural. The mods were always more dandy, much more inclusive and had different musical roots. They were into the blues like Howlin Wolf and Muddy Waters. Their fashion played with urban Americana and Jamaican influences. I thought that was really amazing. 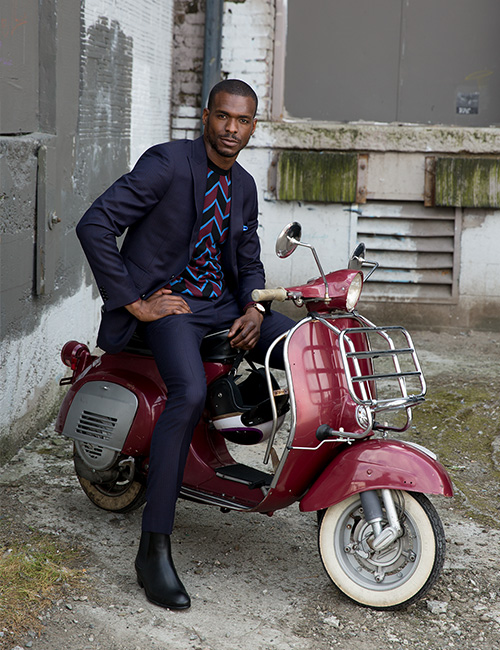 For the shoot, we didn’t want to completely imitate the mods—that would be inauthentic. What I brought to the party for Indochino were more relatable references—there were a lot of people I looked up to who were influenced by the mods and had similar ethics and fashion sense. For me, there’s nobody cooler than Terence Stamp. This guy was the most beautiful man in the world, he dated everyone from Julie Christie to Brigitte Bardot, he was a musician and hung out with George Harrison and Mick Jagger. It was effortless, he was just that cool. He had the great mod haircut, and I looked back wistfully at that reference and I thought, “I love that, and how can we bring that into this shoot?”

What were you looking forward to most in this shoot? 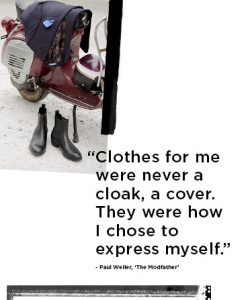 When I look at the photos of mods, a lot of them just look like really great album covers. You have all these cool guys with their great clothes and their vespas, or they’re just sitting there staring at the camera with that quintessential British attitude. I wanted to bring that sensibility into some of these shots and I was really glad that the creative team at Indochino was willing to go pretty far down that road. That takes a lot of courage. It’s really gratifying when everyone is on the same page. When that happens on a shoot, the feeling is so good—it’s like the best of any of your excesses. It doesn’t happen in this business all that often, to be honest.

What’s the one most important piece of advice you can give to someone who is interested in pursuing fashion photography?

Have a good business plan and a good business model, but overall, do it because you love it. Be prepared to stick it out for a few years of grinding it out to get where you want to go. It’s high risk, but it’s also high reward.

Shop online or visit our showrooms to get your hands on our new Fall collection. You can follow @haylettphoto on Instagram to see more of Chris’ work.