On and off the field, Ravens Placekicker Justin Tucker might just be one of the most stylish guys in football. In addition to being touted as the most accurate kicker in the league (he’s missed only nine kicks in his three pro seasons), and his reputation for exemplary performance under difficult conditions, he’s also well versed in classical music and opera, has a closet filled with suits (more than 20, at last count), and tends toward the philosophical when discussing his beloved game.

Since signing to the Ravens back in 2012 as an undrafted free agent (managing to unseat incumbent Billy Cundiff), the scrappy kid from Austin (now nicknamed “Legatron”) has gone on to set a number of franchise and league records. He’s also serenaded his team with a rendition of O Sole Mio, delivered a commencement speech at his alma mater, and done some freestyle rapping in a Dr. Pepper commercial. Even his proposal to fiancee Amanda Bass was a slick affair, carried out on the pool deck of the Four Seasons Hotel, featuring scores of flickering candles, live music by Baltimore band All Time Low, and a stunning view of the city’s inner harbour.

Now, with a wedding on the horizon, and having just wrapped up a successful 2014 season, the Ravens placekicker sat down with us to talk teamwork, family, and, of course, that all-important style.

On being the new kid on the block

“For anybody coming in brand-new – especially rookies – all the vets are kind of waiting for you to prove yourself. Coaches have the same attitude. They want to see who’s going to step up and make a 53-man roster. Because it’s pretty damn hard. There’s definitely this interesting, fun, crazy dynamic, coming in undrafted, competing with a guy in training camp who had already accomplished so much in his career.”

On that Super Bowl win

“My first season with the league had been a crazy combination of wins and losses. Good kicks, and a few bad ones here or there. But to come in and win a Super Bowl with such a great group in my first year – you want to talk about surreal. It’s one of those things – you don’t think about it at the time. You take every moment for what it’s worth, and try not to let it get too big, but then you look back on it and you go, ‘Wow. My locker was two doors down from Ray Lewis’. And I was playing the same team as Ed Reed. And we won a Super Bowl. 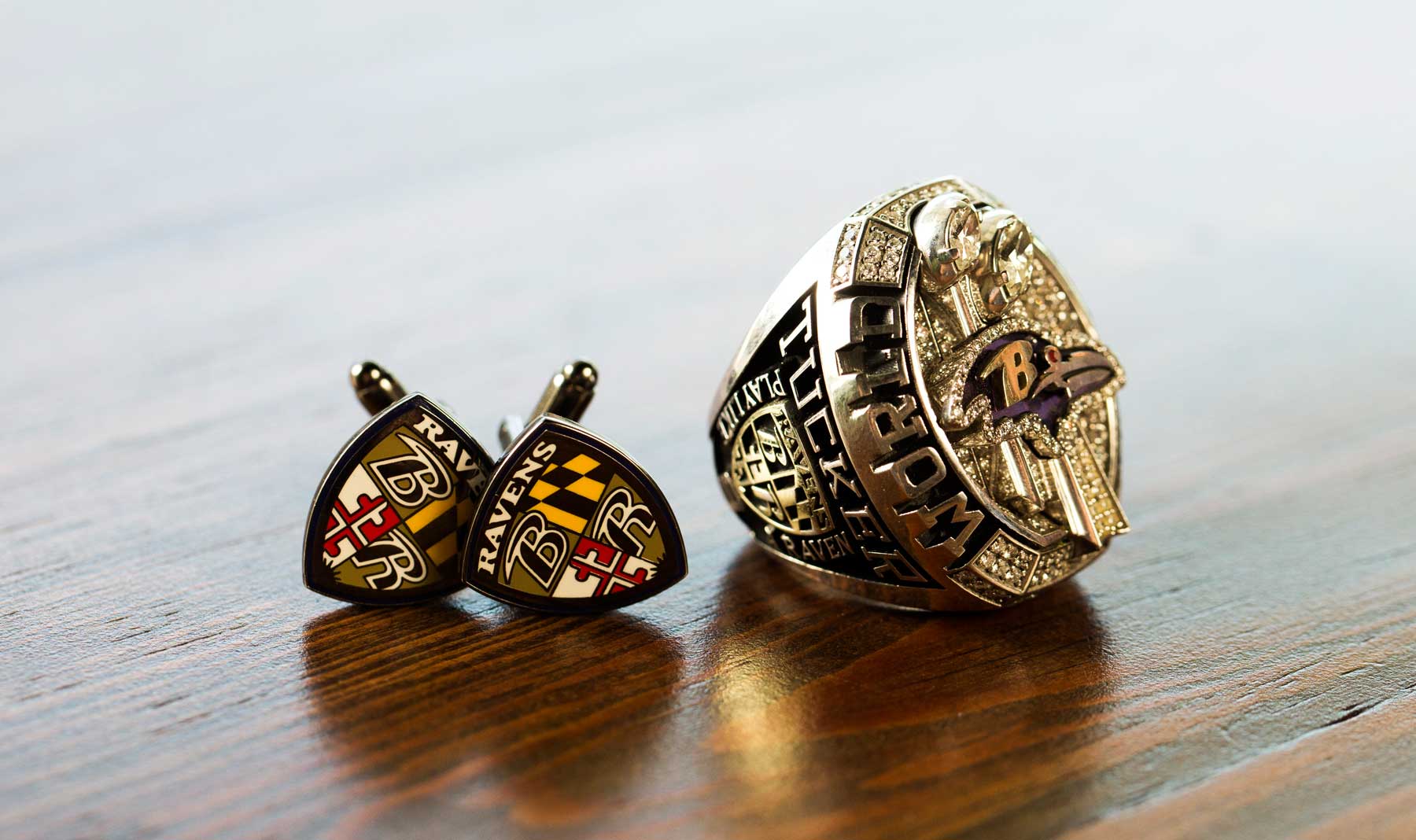 “We have these rings that we get to carry with us for the rest of our lives, and every man on that team is part of something that’ll be etched out of stone. I know that sounds like something out of a Gladiator movie, but that’s how serious it is. While you’re in the moment, you enjoy it, sure, but it’s also just business as usual.”

On keeping your head in the game

“There’s a lot of pressure to maintain a high level of performance. And the pressure isn’t necessarily from anywhere external. I like to put pressure on myself, to try and bring out the best I’ve got.

“I’ve been in this league for three years now, going on four, and each of the Ravens teams have been made up of really great competitors. And part of that pressure – if that’s what you want to call it – is that I want to make them proud. I want to put points on the board for my teammates. I see them every single day, and I know how hard they work. Putting the exclamation point on the end of a touchdown drive, or putting three points on the end of an offensive drive, it’s a testament to everybody’s hard work. Because the ball didn’t just get there. The offence had to drive it down there, or the defence had to cause a turnover. 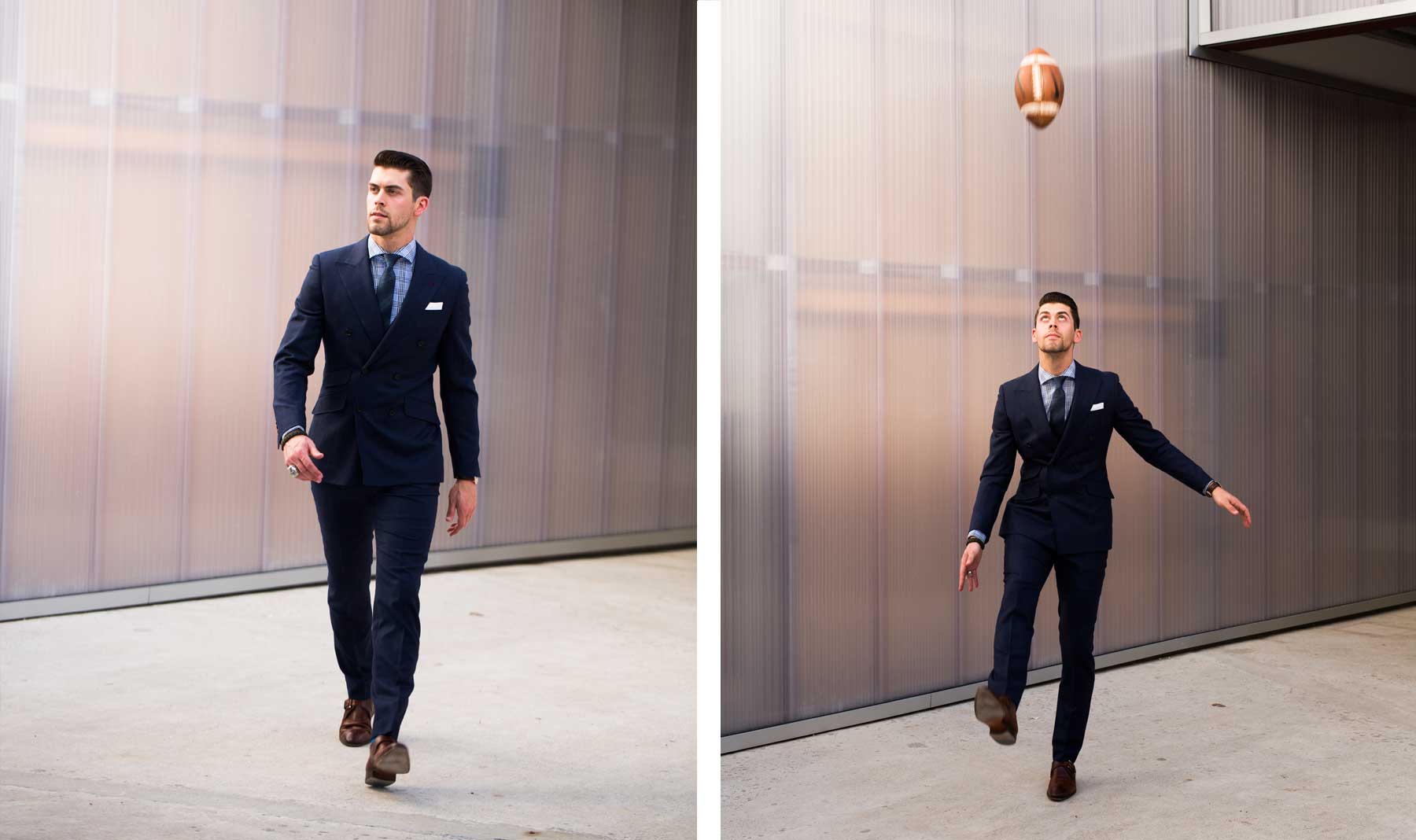 “Even in the one position where it might seem like I’m truly on an island – with that long snapper and our holder – there are still so many people that go into making that moment happen. That 1.3 seconds between the snap, the hold, and the kick. It’s not just the three of us. It’s every single person on that team, and I want to be able to pay everybody back for getting me the opportunity to even set foot on the field.”

On his first suit, and the importance of style

“I’d just gotten my real estate license and started to shadow a broker in the Austin area, a guy who’s one of the top luxury residential real estate agents in the whole state of Texas. After a couple of months of having my license, I got an opportunity to close my first deal, and I felt like, personally, this was a big step. At least, with regard to something that had nothing to do with sports. And I wanted a sick suit to close my first deal. I’ve always had this obsession with different facets of men’s style. I didn’t want to just buy a suit off the rack and look like I was hopping around in a potato sack.

“I like to have a very specific look; something that could be considered timeless and elegant, but at the same time, have a bit of flash here or there. You’ve got to dress not just for the occasion, but better than the occasion. You button up your shirt, you fasten your cuff-links, and you tie your tie so meticulously that you know how long it took you to get ready. But then as soon as you walk out the door, you don’t give a damn what anybody thinks, because by then, you know you look sweet, and that’s all that matters.” 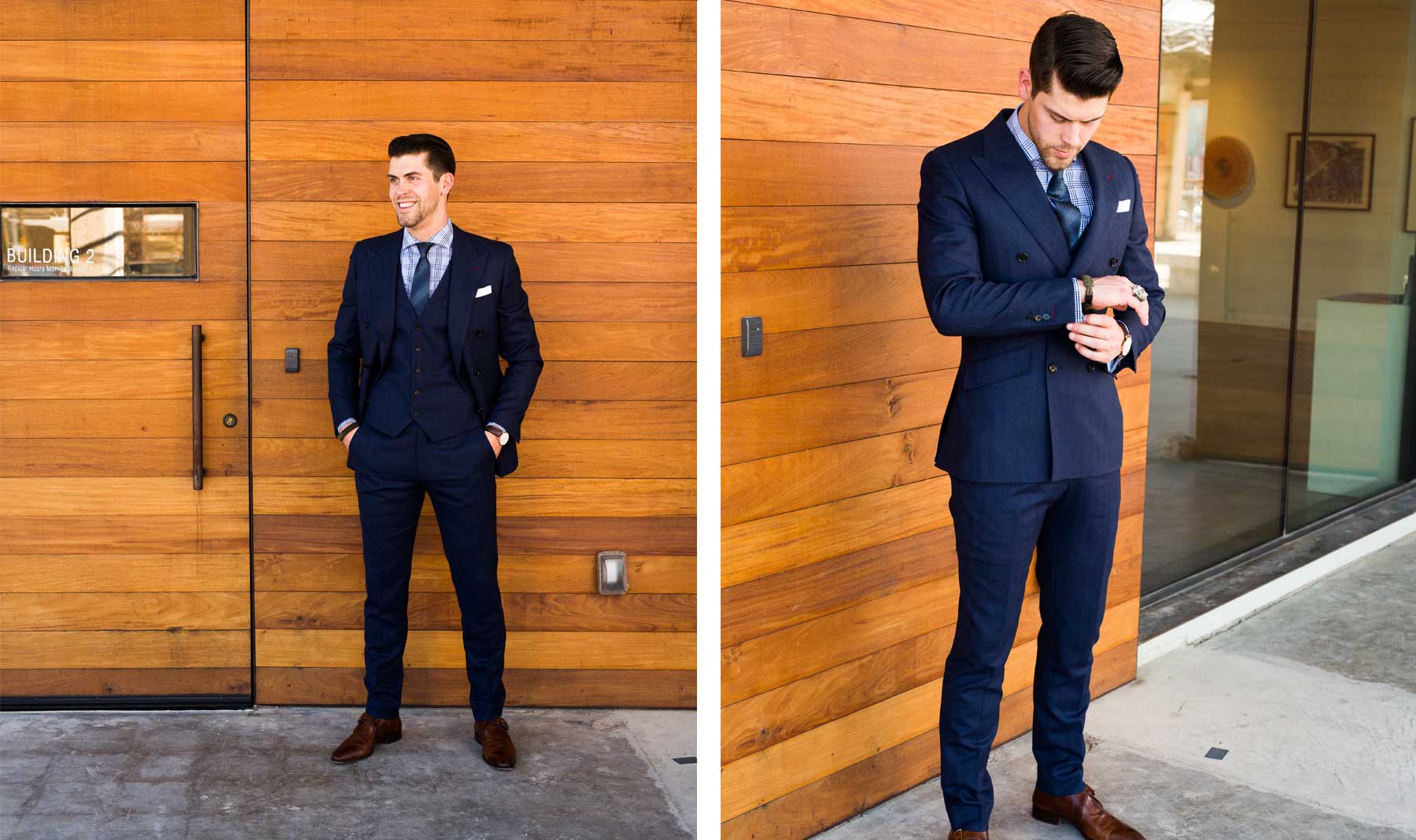 On plans for the off-season

“The biggest thing I’m doing this off-season is getting married. My time away from football, I really love to spend with my fiancée Amanda. We’re starting to plan some trips. It’s still cold, so we’re trying to get to a beach somewhere as soon as possible. Just try to relax. And that’s something that – I wouldn’t say I’ve had a hard time doing it, but there’s an art to relaxation, and it’s something that I’m still trying to figure out. I’ll be hanging out somewhere for a couple of days, not kicking footballs, and I’ll just be going stir-crazy.”

“I won’t say one way or the other who’s going to win, but let’s just say, hopefully there’s a winner by one or two points. I love it when games come down to the wire. I’d like it to come down to a kick. That would be pretty epic.”

Justin wears a 3-piece suit and shirt by Indochino, and his own Super Bowl ring.
We asked if we could borrow it and he politely declined.